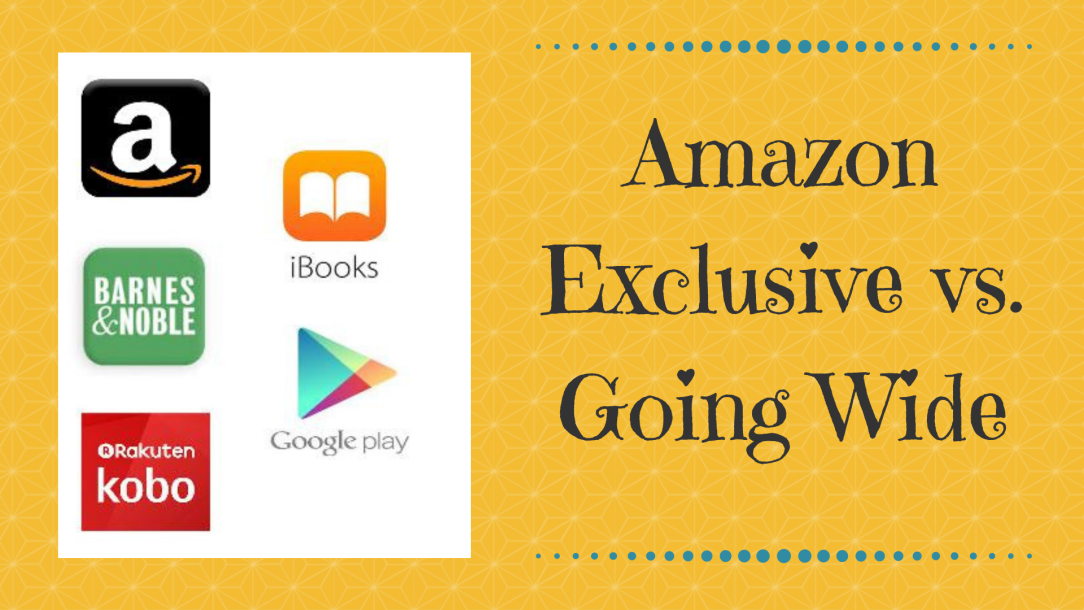 This post is part of my series on “Publishing a Cozy Mystery.” This series isn’t meant to tell you how you have to go about it and dictate what’s right or wrong. Instead, I’m sharing my personal journey from writing my initial draft to seeing my first book, Murder at the Marina, be released. I’ll talk about the good, bad, and the ugly. And trust me, there was plenty of ugly along the way.

Last time I talked to you about working with a professional editor. Once I had my manuscript edited and finalized, the next task on my To Do List was deciding whether to distribute the ebook version (we’ll talk about paperbacks another day) exclusively on Amazon through their KDP Select program or go wide and sell through other online retailers such as Google Play, Apple iBooks, Kobo, and Barnes & Noble Nook.

There’s a huge amount of debate about of exclusive vs. wide, but, to be honest, it wasn’t a hard decision for me. More on what I decided later and why, but first off, let’s go through what exactly it means to be exclusive or go wide and what some of the pros and cons are.

Established in 2014, Kindle Unlimited is a subscription service offered by Amazon in certain countries. There are currently over one million titles available. For a flat fee (currently $9.99 a month in the States), users can borrow and read as many books as they want. For voracious readers, this can be real value for money.

When you publish on Amazon, you can opt to enroll in KDP Select and make your book available in Kindle Unlimited. It’s also added to the Kindle Owners’ Lending Library where it can be borrowed by Amazon Prime members.

Each month, authors get a cut of the KDP Select Global Fund based upon the number of pages people read in their books. {For reference, in April 2018, the fund was US$21.2 million and the payout was US$0.0045 per page read.} Authors with the most page reads are also eligible for an All-Star bonus payment. Authors enrolled in KDP Select can also take advantage of promotional programs such as Kindle Countdown Deals.

It all sounds great, however, there is one big catch—you have to be exclusive to Amazon for a period of 90 days, which means that you can’t sell your ebook anywhere else. At the end of the 90 day period, you can opt to renew or remove your title from the program.

The other option is to not put all your eggs in one basket and “go wide” by distributing your books on other online sites, the big ones being Google Play, Apple iBooks, Kobo, and Barnes & Noble Nook.

Some Pros & Cons of Each Approach

1 – Amazon’s huge market share—Let’s face it, Amazon is enormous. It’s the biggest show in town. Enrolling in KDP Select and making your books available on Kindle Unlimited allows you to tap into a huge pool of potential readers.

2 – Better ranking and visibility—Amazon’s algorithms calculate book rankings based on both sales and page reads. You may have a better chance of ranking higher on Amazon if you’re in KDP Select, which in turn can increase your visibility.

3 – Promotional opportunities—Having a Countdown Deal or making your book free can be a great method for attracting new readers, increasing your rank on Amazon, and, if you have a series, hooking people into reading other books in the series. {Note: If you’re not in KDP Select, there are workarounds you can do with price-matching to get Amazon to make your book free.}

4 – Getting a 70% royalty on books priced less than $2.99—Many people price the first book in their series at 99 cents to draw readers in. If you’re not part of KDP Select, you’ll only get 35% royalty.

1 – Getting kicked out—You’ll often hear horror stories about Amazon kicking authors out of Kindle Select, and in some cases off of Amazon altogether, for not abiding by the program terms and conditions. If your ebook is for sale elsewhere online, you’re in trouble. For many people, it isn’t something that they’ve deliberately done. They may have previously offered their book elsewhere and the listing didn’t get taken down or a pirated version may be out there. If you don’t get those listings taken down, you’re out. Amazon also tries to crack down on scammers who artificially inflate page reads. Unfortunately, some innocent authors have been getting caught in the cross-fire and kicked out.

2 – Losing potential income to scammers and cheats—While, on the whole, the indie author community is incredibly supportive of each other, there are some less than scrupulous people who are cheating the system. That means that they’re taking a share of the KDP Global Fund each month that they don’t really deserve. Essentially, they’re taking money out of your pocket.

3 – Cannibalizing sales—Because people can borrow your book, rather than buy it, you’re potentially losing out on sales. Hopefully, the borrows and page reads make up for it.

1 – Multiple income streams—Because you’re not putting all of your eggs in one basket, you have multiple income streams. If something goes wrong with one of them (maybe you’re kicked off of Amazon), then you haven’t lost everything. Granted, the income you receive from non-Amazon streams may be minuscule in comparison, but every little bit helps.

2 – Building readership in international and emerging markets around the world—As big as Amazon is, it hasn’t taken over everywhere. If you’re focused on the US and UK markets, Amazon is a great way to go, but for other markets, you may find readers more easily through other online retailers.

1 – Missing out on promotional opportunities and potential readers—There’s a reason by Kindle Unlimited is popular with many authors. The potential benefits are huge and, by going wide, you’re missing out.

2 – Managing multiple retailers—If you’re only on Amazon, then you only have to deal with Amazon, which makes things easier. If you’re going to distribute your ebook on multiple retailers, then you increase the number of details that you have to manage (e.g.,  pricing, ebook format, sales reporting, book listings and descriptions), especially if you go direct rather than via a publishing aggregator, which we’ll talk about in a future post.

3 – Harder to gain traction—It can be hard to attract readers outside of Amazon. If you’re going to go wide, then you need to play a long game and realize that it may take time to get your ebook discovered.

Like I said above, for me the decision was easy—I chose to go wide. There’s something about putting all my eggs in one basket that makes me uneasy. Plus, I’m unnerved by the fact that there’s one dominant player in the ebook market. I kind of like to think that I’m helping to shore up other online retailers, albeit in a incredibly small way, by making my book available on Kobo, Google Play, Apple iBooks, and Barne’s & Noble Nook. In addition, I know that there are people out there who refuse to shop on Amazon or prefer non-Kindle devices and I want to be able to reach them as well.

However, I’m very aware that this might be a bad decision on my part. Cozy mysteries are a very popular genre in Kindle Unlimited. There are lots of cozy readers out there who I may not reach because they do all their reading in Kindle Unlimited and are unlikely to fork out money to buy my book. I’m also missing out on promotional opportunities which could help hook people into future books in my series.

With hindsight, perhaps what I should have done was launched Murder at the Marina in Kindle Unlimited for a period of 90 days to attract readers and get a better Amazon ranking, then removed it and gone wide after that. Maybe that’s the approach that I’ll take with my next series.

Derek Murphy talks about how he was kicked out of Kindle Unlimited and lost $50,000 overnight.

Reedsy takes you through the two options in their Complete Guide to Ebook Distribution.

David Gaughran talks about the different marketing systems each choice involves—the “KU Hare” who takes a big monthly blast approach vs. the “Wide Tortoise” who adopts a slow and steady drip approach. He also shares stories about what can go wrong on Amazon here, here, and here.

It’s interesting to look back at some indie authors’ thoughts on KDP Select and Kindle Unlimited back when it was established including this post by Hugh Howey and this one by Lindsay Buroker.

If you like videos and podcasts, check out Michael La Ronn’s take on whether KDP Select Is Worth It? on Author Level Up, The SciFi and Fantasy Marketing Podcast’s interview with David Gaughran about the Marketing Wide vs. Kindle Unlimited debate, Chris Fox’s Launch to Market video series and why he enrolled in Kindle Unlimited, the Alliance of Independent Authors’ session on the pros and cons of going wide vs. exclusive, and Joanna Penn had an extensive overview of wide vs exclusive in terms of ebooks, print, and audio.

Other posts in my “Publishing a Cozy Mystery” series:

What do you think of the Kindle Unlimited vs. Going Wide debate? Where do you buy ebooks?

Dead in the Dinghy Now Available! The latest Mollie McGhie Cozy Sailing Mystery is now available! Grab your copy of Dead in the Dinghy at your favorite retailer HERE!